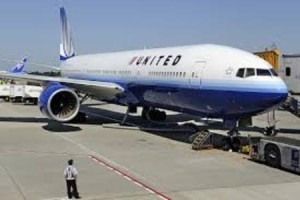 We squeeze into seats in the cheap peasant section of the jumbo United Airlines flight from LAX to Dulles in Washington DC.  In a few minutes we were settled in our seats, the cabin doors are shut and a flight attendant ordered “Cross check”.  One of these days I will find out what that means.

A tired looking flight attendant directed our attention to the TV monitors that dropped down from the ceiling.  This is the safety video that reminds us “that in the unlikely event that we loose cabin pressure place the oxygen mask on yourself first then place it on your child” … if you want.

Thirty seconds into this Academy Award winning video we heard a loud banging on the fuselage.  A man was standing at the end of the jet way ramp pounded his fist on the outside of our plane.  His persistent and forceful knocks demanded entrance.  I assumed he was a very late passenger who felt entitled and very determined to catch this flight.  Flight attendants standing near the main cabin door wondered what to do.

A man in his 30s dressed in a blue suit stepped through the opened door and past three flight attendants.  They didn’t know what to make of this strange visitor.  Without smiling or greeting them he took an immediate left and walked directly up to the secured door to the flight deck.  The man held papers in his left hand and with his right hand knocked on the Captain’s door.  One of the pilots opened the door.  He entered the small space behind the pilot’s seats and closed the door behind him.

A minute passed.  None of us are watching the video that is showing us how to use our seat cushions as floatation devises in case we make a water landing.  There is not much water between Los Angeles and Washington DC.

“This is the Captain,” he begins, “in my 20 years of flying I have never had this happen.”  What?  The Captain’s voice usually sounds like the voice of God but now sounded confused, befuddled.  “This is a first for me.”  The man who demanded entrance onto the plane served legal papers on the pilot.

“Wells Fargo has just repossessed our plane!”  Huh, you mean United Airlines didn’t pay their bill to Wells Fargo?  Apparently not.  The Captain ordered us off the plane and promised to put us on another flight.

All 180 souls gathered their belongings and assembled in the same terminal gate where we had earlier waited to get on the plane.  The pilot was the final person off the plane.  In the terminal he just happened to walked up and stood next to me.   With his hand clutching the pull handle he propped his black rolling luggage against his right leg.  He was wondering what to do like the rest of us.

“What is your reaction to what happened?” I asked.   This open-ended fact question is a standard conversation starter for me.  Men always have reactions and I figured he would have several.

“He was a repo man,” he repeated as he more clearly realized what happened.  “This is how the rest of my life is going,” he added.

“Oh, don’t get me started.  You don’t have time,” he said as if asking me to take the time to hear his story.

I’m stuck here until they bring another plane,” I answered.  “Tell me what is happening.  I’m interested.”  We stood at the large window overlooking our repossessed jumbo jet.

“Okay, I just learned my best friend is banging my wife,” he paused … testing if I wanted to listen to more.

“I’m so sorry.  You must feel terribly betrayed,” I said empathetically.  “Tell me more.”

“My teenage son is on drugs and my daughter hates me for some reason.”  I was standing next to a Divine Appointment.  The pilot needed someone to hear his story.  We gazed aimlessly out the window when our attention was drawn to a tug drove around the building and parked in front of the 757.  The driver stepped off the tug and hitched a tow bar to the front landing gear of the giant plane.   He climbed back in his seat and waited for three other ground crew members to take positions around the plane. Two stood below the left and right wing tip and another the rear of the plane.

He was about to push the plane into a traffic lane where other planes were coming and going.  It was their task to watch that their plane was not pushed into another plane. Once the three member escort crew was in position the tug revved up its big engine, a black plum of exhaust belched from the tail pipe.  With brute force the tug slowly pushed the 220,000-pound airplane away from the gate.

“Right now I don’t feel like living.  I just wish it would end.”

“This must be a very hard time for you,” I said.  Wait, I was slow to realize, “He is suicidal and a pilot.”  The pilot realized he said too much to a stranger and wished he could take it all back.  “I know that God loves you and is able to help,” I state as a fact.

“Yeah, I used to be a Christian but I just drifted away,” he explained.

“Can I pray a blessing on you?”  I have asked this question thousands of times to people in every possible walk of life.  Not once has anyone declined my offer.  Everyone wants a blessing.  Everyone, atheists, followers of other gods and even the non-religious want to receive something good from God.

“Here?” he looked around to see if anyone were watching.  “Now?”  He was afraid I would embarrass him by putting on a freak show with frenzied prayer.

“Yes,” I answer to have him deal with his fears.  Not knowing what I might do he summons his courage.  I will never embarrass someone when they are vulnerable.  “Lord,” I began in a conversational voice, “you love this precious man.”  We continue to look out the window and appear like everyone else who was having a normal conversation.  “Draw him back to yourself.  Be with him as he loves and helps his family.  Amen.”

“That’s it?” he said with relief that nothing strange happened.  “Well, what I really should say is, thank you.”  He turned to me and tears began to run down his face.  “I have hardened my heart to my family and I need to love them.  That is what they want from me.”

“The Lord revealed that to you just now.”  He nodded his head in agreement.  “Get reconnected with the Lord and trust that the rest will work out.”  Just then his First Officer walked up to us.

“Oh, good.  I’ve been looking all over for you,” he said to his Captain.  “We need to head to Operations for a new flight.”  Our Divine Appointment was over.   We shook hands to leave.

“Captain,” I said to reassure him, “the Lord is with you.” I was not expecting his response.

“And also with you,” he answered.  He used code words that only believers know and exchange among themselves.  From the beginning of the Christian movement and for the past 2,000 years these precise words are still a common greeting among followers of Christ.  This pilot had been trained in the traditions of the faith.  Already he was reconnecting with his faith roots. It was apparent that his earlier journey with God was already reawakened.

God used the repo man for a Divine Appointment.